(A meeting room somewhere in a giant office building. Early afternoon. Four people sitting around a table. It’s a typical job interview scene. On the table are coffee cups, a glass of water, pen and paper, a laptop.)

Unfortunately, this is not an excerpt from a comedic play written to entertain the holy caste of software developers. This has actually happened less than a week ago. Repeat after me: “This actually happened.”

Last year I stumbled across Jeff Atwood’s blog post The Non-Programming Programmer. Which led to Why Can’t Programmers… Program? Which then led to Reginald Braithwaite’s Don’t Overthink FizzBuzz. All these posts fit in nicely with basically all the stuff Steve Yegge wrote about hiring as part of his Drunken Blog Rants.

I’ve come to discover that people who struggle to code don’t just struggle on big problems, or even smallish problems (i.e. write a implementation of a linked list). They struggle with tiny problems.

Like me, the author is having trouble with the fact that 199 out of 200 applicants for every programming job can’t write code at all. I repeat: they can’t write any code whatsoever.

Based on my recent experience I totally have to agree.

When I first read all that stuff about FizzBuzz, I assumed that this must be more or less just a bad joke. Or that it might apply to a specific job market. I would have never guessed what I was about to experience once we included a little exercise into our hiring process.

To be able to better compare applicants we restructured or interviewing process. Less chatter, more content. Identical questions for everybody, not too heavy. A little bit about object oriented programming, JPA, estimation techniques, testing and little coding challenge using pen and paper. Even pseudo code is fine.

The coding challenge we are using is to make the candidate write a little function that returns a Fibonacci number.

The Fibonacci numbers are actually part of a Project Euler problem that asks for the sum of the even-valued terms in a sequence whose values do not exceed four million. Give it a try.

So, what do we actually expect?

Candidate: “Let’s see…I need a function. What about this? return 0 for now. Otherwise it won’t compile (bonus point).

I assume that using int is fine for now. For the return value as well as for the parameter. OK? (Feedback loop, bonus point.)

So, what shall happen in case we call compute(0) or compute(1)? You said the first two numbers, 0 and 1, are always given?

Hmm, what about compute(-1)? Is this defined? Let’s change this (bonus point again).

Now I need to implement the actual algorithm. Let me introduce two variables here, a and b. Far from perfect variable names, but for now a and b should be sufficient. 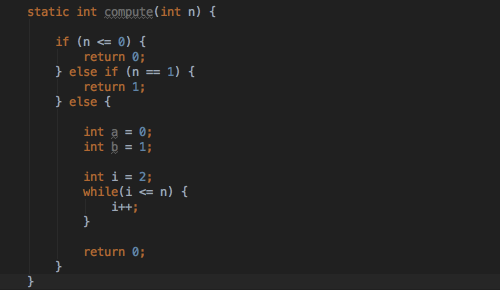 But I am not done yet…What do I want to return instead of 0? And I need to store my sum…Let’s store the sum in b…and return b… 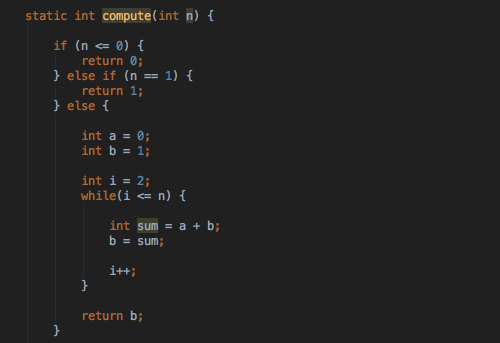 Me: (Tears of joy are running down my face.)

Candidate: “You said I can use recursion if I want to? (Candidate to herself: “There must be a simple recursive way to do this…otherwise they wouldn’t have asked me.”). Let’s see…”

To speed things up, I skip the part up to the actual implementation. The if-else part remains identical.

Bonus points if the candidate mentions that recursion needs to terminate. This is guaranteed by the if-statements already.

Now we are talking. What’s the difference between the iterative approach and the recursive one in regards to speed? What about memory consumption?

It took all our applicants ages to implement a function based on the given input. We’ve seen a lot of implementations that did not work at all. Did some candidates realize their code is not working? No, far from.

Only one candidate went for the recursive solution and he literally had to be carried across the finish line.

I put this exercise up on my Facebook page to ask my developer friends for their input. Replies and coding challenges came up all night between different time zones.

Here are my favorite replies from a friend working for Google:

There is a roughly correct solution in constant time. (Hint: Binet)

I heard of a guy at work who was asked to multiply two numbers of arbitrary size (larger than primitive int). He solved it in the most optimal way in 20 minutes.

For reference, the majority of candidates take 40 minutes to add two arbitrarily large numbers with the simplification of storing each digit in a separate array element. Plus, they tend to have bugs in their final solution.

One friend mentioned that this might not be an ideal question to figure out if the candidate is a great fit for a Java Enterprise environment or not. Because that’s what we are currently looking for. What about clean code, architecture skills, team work?

I can see his point BUT…

FizzBuzz is reality! The industry is still booming and I think this is something we have to live with for now. We might have to adapt our hiring process to include a phone screening up front and some coding using a shared Google Doc, as suggested by one of my friends.

And most importantly, I have to keep writing this blog, not to get completely FizzBuzzed as well someday.

One thought on “Fibonacci Fail”